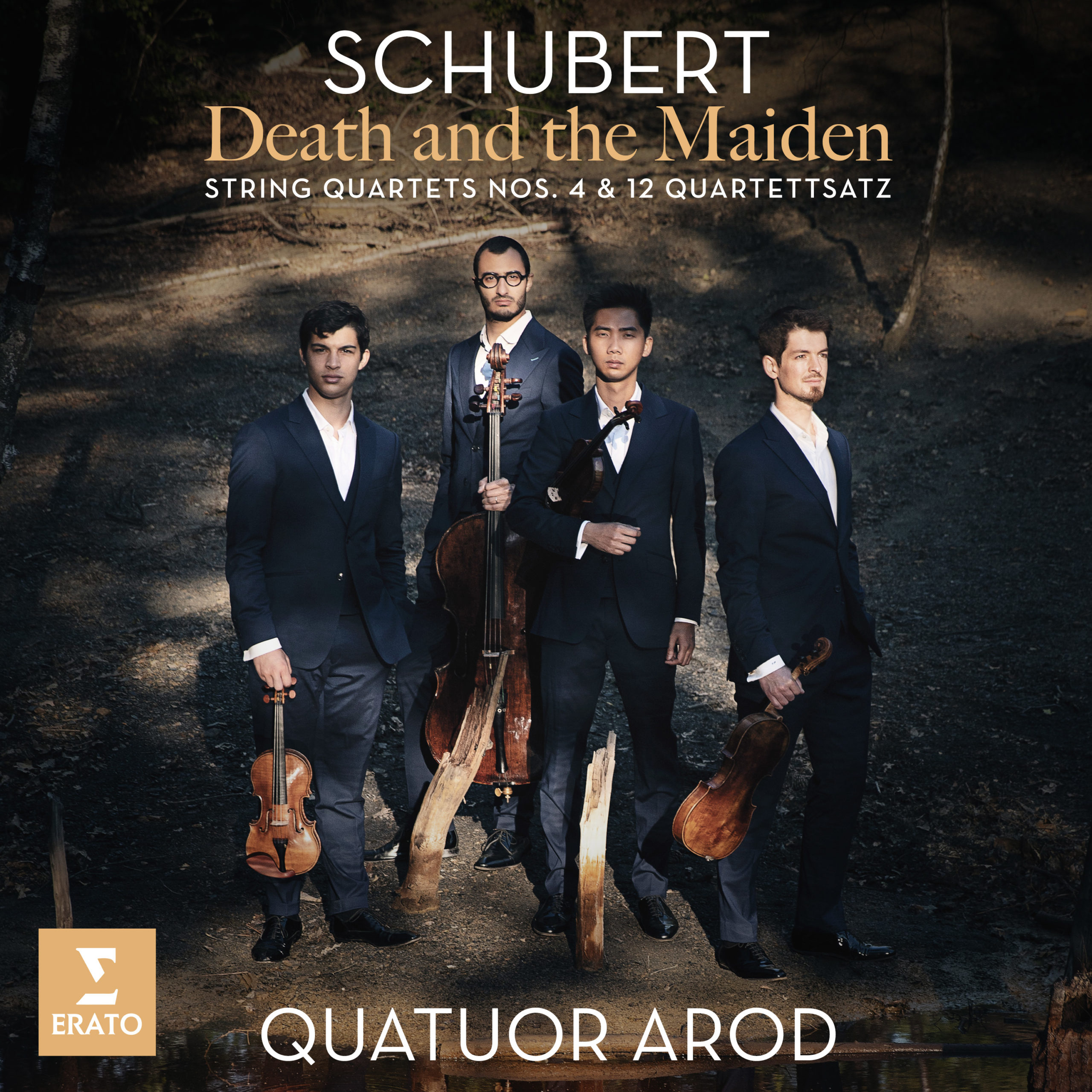 Schubert – Death and the Maiden

“An outstanding album”, was Gramophone magazine’s verdict on the Arod Quartet’s last release, a programme of Schoenberg, Zemlinsky and Webern.  Remaining in Vienna, the young French quartet goes back to the time of Schubert. “We wanted to explore several stylistic phases in Schubert’s life,” they explain. The centrepiece is his gripping Quartet No 14 (‘Der Tod und das Mädchen’/’Death and the Maiden’), written in the final years of his short life and complemented here by the Quartets No 4 and No 12 (‘Quartettsatz’).

So, what is this “Arod”? A forgotten composer, a mythical city, a mysterious acrostic? Why not, indeed. In fact, Le Quatuor Arod chose as their tutelary figure a horse imagined by Tolkien in The Lord of the Rings. A symbol of strength and ardour (his name means “agile, swift”), he also embodied a spirit of freedom and companionship given that the elf Legolas provided him with a bareback horse, without reins.
This community of the bow was born in 2013 at the Conservatoire de Paris. All the members of the quartet studied there, benefiting in particular from the teaching of Jean Sulem. Starting out as a group of students, burning to get their fingers on the finest pages of the repertoire, the ensemble chose as their first outing the FNAPEC competition, which has crowned such great string quartets as the Modigliani and Ysaÿe. The Quatuor Arod won the first prize there (2014), which for them opened the doors of the ProQuartet residency–the European Centre for Chamber Music.

After working at the Conservatoire with the Quatuor Ébène, then very regularly with the Quatuor Artemis at the Chapelle Musicale Reine Élisabeth in Brussels, the quartet took up a residency at the Fondation Singer-Polignac then gave itself a new, ambitious challenge with the Carl Nielsen International Chamber Music Competition in 2015. To prepare as best as they could, they turned to the person who was to become their real mentor: Mathieu Herzog, the violist of the Quatuor Ébène, now a conductor. With him, they refined their technique and their musicality, but also learned how better to cope with a constantly shared daily life. This competitor, which they entered with both serenity and pleasure, remains one of the greatest memories of Arod, because they won the First Prize as well as two Performance Prizes.

When the quartet decided to take on the Everest of competitions, the ARD in Munich, quite naturally Mathieu Herzog was there to give them a fillip. This work and this daring paid off because they won the First Prize, a supreme accolade which has been awarded only seven times since 1959 and their victory in 2016. Now at the stately age of three, they were following in the footsteps of such previous masterful winners as the Tokyo, Artemis and Ébène quartets.
Pushed into the limelight by this exploit, the Quatuor Arod was made the BBC New Generation Artist from 2017 to 2019 and the ECHO Rising Star for the 2018-2019 season, before continuing their glittering career. Just five years after their first harmonies in a rehearsal room at the Conservatoire, they are sought for across the five continents and in the most prestigious concert halls: the Philharmonie de Paris, the Wigmore Hall in London, the Berliner Philharmonie, the ElbPhilharmonie of Hamburg, the Concertgebouw of Amsterdam, Bozar in Brussels, the Oji Hall in Tokyo and none other than Carnegie Hall in New York for their first tour of the USA.

From Gramophone to Le Monde without forgetting The Strad and Diapason, critics have also hailed the rare energy of the Quatuor Arod in concert as well as the quality of their recordings, the first of which was devoted to Mendelssohn, and the second created like a musical kaleidoscope centred around Mathilde Zemlinsky.
The quarter also enjoys working with such artists as Elsa Dreisig, Adam Laloum, Jérôme Pernoo, Antoine Tamestit, Alexandre Tharaud and Camille Thomas. More than just being performers, they are also driving on the music of tomorrow: in 2017, they premiered Al Asr, Benjamin Attahir’s first string quartet, commissioned by La Belle Saison and ProQuartet.

Beethoven String Quartet Op. 132 by the Quatuor Ebène, as much for the musical acomplishment  as the dimension of the project.